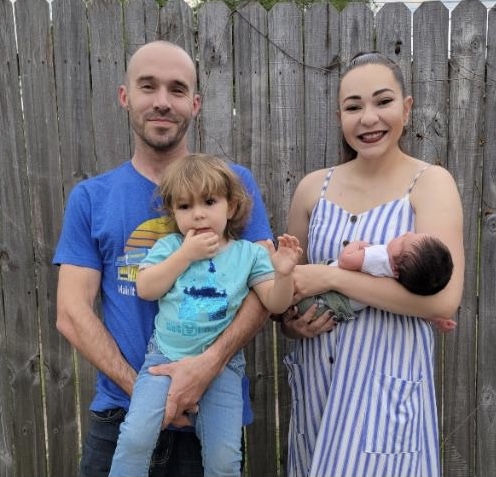 After suffering through quite a traumatic pregnancy with my daughter, I was beyond apprehensive to attempt getting pregnant again. Being a Type 1 Diabetic means that pregnancy symptoms are often exacerbated beyond normal circumstances and unfortunately, those symptoms traumatized me during my first pregnancy.

When my husband mentioned wanting to plan for our second child earlier than originally expected, I admit I was a little panicked. However, it couldn't have been better timing.With the pandemic changing every single day we gained the new perspective of “this has to be the right time; we could regret it if not now ”. So, we began trying, with the expectation that we might not get pregnant the first go around like with our first pregnancy. Low and behold, it happened again, and we found out we were pregnant the day before my Father in Law passed away from Prostate/Bone cancer.

It was a weird blessing to us, and I knew that he had a part in bringing in this little life to the world. We chose to honor him by naming our baby Micah, whether they were a boy or girl. We’ve always chosen gender neutral names for our kids because it feels sweeter to us to be able to refer to them by name while we wait to find out who will be joining our family. Our little guy ended up stealing his sisters thunder when I was called with the results from our genetic test on her birthday. That day, I was able to celebrate his big sister and tell my husband that the family name would live on.

As the pregnancy went on and our announcements were made, I was feeling beyond blessed to have a pretty uneventful pregnancy this time around. However, in December, I learned that I was suffering from extreme perinatal depression and anxiety. My OBGYN team was beyond supportive with this new step in my pregnancy and have continued to check in with me, which has felt heaven-sent. Being taken care of and taken seriously with mental illness was new to me and everyone deserves the support that I was given by my team.

I was overjoyed to be a patient with the Loch Haven OBGYN (now AdventHealth Medical Group OB/GYN at Orlando) team of doctors and midwives as well as the team at the Fetal Diagnostic Center of Orlando. I knew that my son and I were in the best hands possible during this pregnancy. When it came close to the end of my pregnancy, the familiar feelings of apprehension and anxiety crept back in. We planned induction at 38 weeks, but I felt in my heart that I wouldn’t make it that far because of the symptoms I was feeling and just trusting my gut. I had my last NST appointment the day before I went into labor. In the early hours of March 13, 2021, my husband and I made our way to AdventHealth Orlando to deliver our little man. At 10:54 am, I delivered our son at 36 weeks 6 days, just a day shy of my 26th birthday! His arrival was the best birthday gift I could’ve ever asked for. Micah Robert (Micah: Who is like God and named after his grandfather, Michael. Robert: Shining with Glory and named after his great-grandfather, Robert) completed our family.

A million thanks to our labor and delivery nurses as well as my incredible midwife Deborah Brown for giving us the labor and delivery experience we envisioned from the day we found out we were expecting. Micah had a few complications at birth involving blood sugar regulation and jaundice which the NICU team assured us would be regulated with their care. We cannot thank the NICU team, especially Lauren, for caring for our little guy with so much love and attention. It was difficult being discharged without him, but I knew he was in the best hands possible to help him be ready to come home. Thankfully, his NICU stay was a short one. My thoughts and prayers have remained with all of the families navigating NICU life and wish them the best on their journey to bring their littles home. All in all, Micah has been a huge blessing for our family and so has AdventHealth. The care and love we felt while there has given us a sense of peace and has translated to our home life. I cannot recommend AdventHealth Orlando enough!